You will hear about start tactics, positioning, course awareness, power ups and the all important finish move.

Why race on Zwift?

Racing online with Zwift has become the new hot thing in the world of Cycling.  Right now you can login, join a race against people from all over the world, and not have to leave the comfort and convenience of your own home.

But racing on Zwift isn't like racing on the Road.  There are a few similarities, but there are also some tricks to the game play.  Quite often we see very accomplished and powerful road cyclists try to race on Zwift and get beaten quite significantly by less proficient cyclists IRL (In Real Life).

Which race should I choose?

There are literally dozens of races every day on Zwift, so choosing the right race for you can be quite daunting and confusing.  Firstly you should know which grade you will be in based on your w/kg at FTP.  The grades range from A through to D, and if you race in a grade too low for your FTP setting you will be disqualified.

Look for races on the styles of course that suits you.  Are you more suited to a short sharp Criterium race, or are you better on a longer hilly or rolling course?  From here you can then decide which race to do.

Look for race series to enter.  There are plenty of events or tours on which make it fun as you will be racing the same people over and again.  Often National Federations have a race series on, such as Triathlon New Zealand, British Cycling or British Triathlon; and anyone from around the world can enter these races.

Race enough and you may even find yourself being recruited into a team to make it even more exciting. 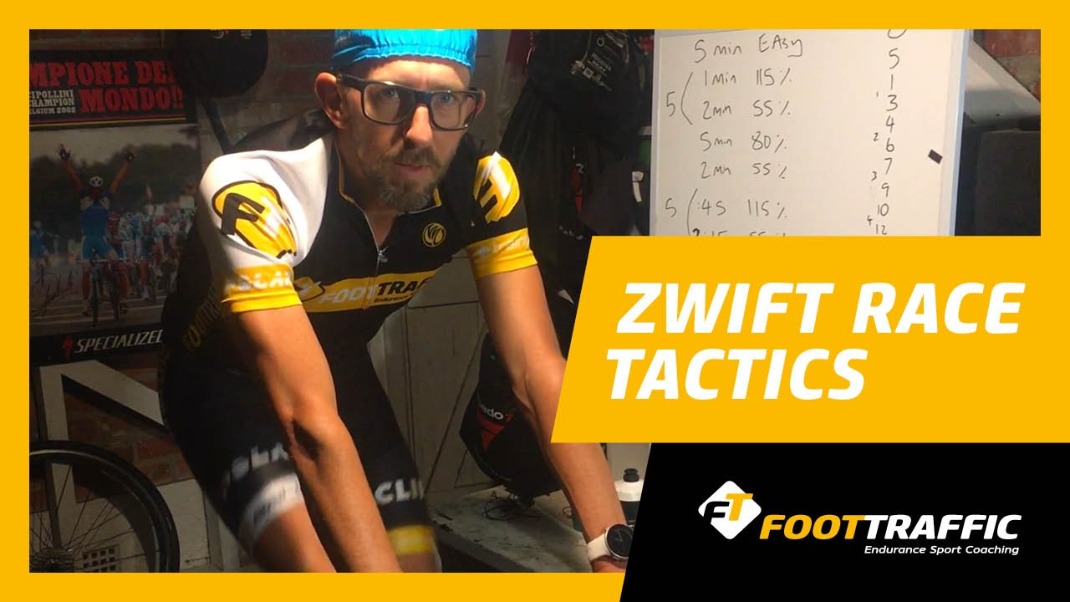 Okay, so I'm just going to do a Zwift race tonight, it's just a little Crit City League race.  It's only a 15k race, I think it's 12 laps around the Crit circuit the downtown dolphin circuit.

I did a work out this morning So I just want to go through this race and sort of commentate as I go with tactics around how to race how to use your power-ups, how to position yourself in the race and we'll see how it goes but hopefully I go alright but I'm not expecting a huge amount.

The first thing that is worth noting I made sure I got to the start line really early so I was here about 12 minutes before the start and I was the first one on the start line.

So when you get position on the start line that goes priority to when you join the event so if you get there early get to the front, if you get there late you get pushed to the back and if it's a big race field where there's 60 70 80 over a hundred people racing. You're already all along way back at the start.

There's 21 people in this race so it's a small field doesn't make a massive difference but it's just good to get into the habit of turning up early that way it gives you a chance to make sure your Connections and your signals strong and everything's working well.  You've got your music on and you just sit here and spin so I'm just I'm just spinning away, really low intensity at the moment Keep the blood flow. I've got my drink bottle handy I've got my phone next to me with my dashboard so I can activate the power-ups when they come through.

We've got less than a minute to go.

This is a pretty short sharp race, let's get into gear first thing I want to do is make sure that I'm in the right gear for the start and that when the countdown is gone when the race is on.

I want to be pedalling at a pretty solid effort so as soon as you hit the road you're going.  If you are flat and you're not pedalling and it starts you're at the back already straight away ten seconds to go going to get my power up...Three two one and we're off.

Straight at the front already nice, I'm just going to sit here.  I don't need to do too much early work.  Good to see the course.

There are a couple of guys doing a bit of work early on, a little bit of a hill, some cobbles.

See the group is still pretty well together. I'm always looking at the screen. Where the other riders are so I know who's around. This guy in front of me using his lightweight, Feather Weight Power Up, a little bit of an attack going on. Just staying in contention there And we got them back, that's good.  I've got a Feather Weight, gonna use it soon.  That went well, we've got two seconds on the group behind.  See if we can make this work. They're coming back.

I've got another Feather Weight, that's good.  Going to use the feather weight.  We've got three seconds on the group behind that's good.  There's a man up the road, that guy ahead of us is eleven seconds up he's working really well.

Now it's about conserving energy with 6k to go, over halfway.  I'm going to save this Draft Boost for a little bit later on this lap, where I have  struggled in the past.  This guy has started struggling a bit, well the fourth one is.  The other guy's a minute ahead of us, I think he's riding out of category.

Didn't get a Power Up on that lap, that's a bit of a shame. I'm going to soft pedal a little bit here I really don't really want to be leading. We've got a good lead on fifth place though, 20 seconds

Here we go, lightweight, gonna tag him. He's gone, that's good. Alright, we've gotta work together.  He was the guy I was worried about. Six seconds, just like that.

Will just sit back behind this guy, and await my time to take my Draft Boost with about 400 ago, hopefully.

He pushed me in front, here he goes.

Oh, yes. That went alright, that was good.

So, a bit of a summary.  Finished third place, pretty much went as I thought it would be happen.  Although, the guy that won it was a minute and quarter ahead which was 5.8w/kg.  Don't believe that, I rode 4.5, I'm really happy with that.  The guy that beat me who got away on that climb. He rode 4.1 but 349 watts average.  Thirty watts higher than me So he's a big powerful rider, but the thing I'm really happy with was the guy that I beat in fourth Who used the power up Probably too early.  He used it to try to accelerate But it was too soon before the end of the race And I timed it nicely had a draft boost so I engaged that Just as his light weight was fading. So I was sitting on his wheelI knew he was going to run out of power, and I had that momentum and that's what it was to put 6 seconds on him in the end. So I'm stoked. I don't really have a lot of sprint finishing tactics, but Pretty happy to come away with third. I'm normally the one that comes forth in a field of four so I was very happy with it.

So hopefully you got some tips.  Please ask me any questions you want I'll try and get my breath back to answer them, but email me or comment on the video below hit me up where ever.

Happy to help out where I can but ahh It's good times.

Thanks very much. Thanks Andy for filming you. Hope you arm isn't too sore