I take a ‘smarter not harder’ approach to training and adaptation. I have often said that I train humans, not robots; you cannot absorb what you cannot recover from. I use heart rate response to training loads in order to build an individualized model. I also believe that enjoyable training is effective training; the more you fall in love with the process, the better. An extensive background in exercise physiology helps me discern the appropriate changes I want to see happen for each athlete. 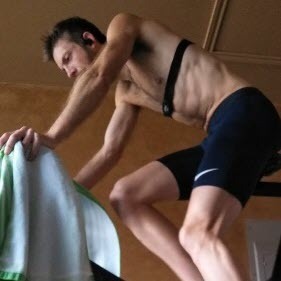 RJ Cowan competed in cross country and track and field in the NCAA where he became a two-time All-American, South/Southeast Regional Champion as well as a multi-time school record holder.

Post-collegiately, RJ was accepted into the Elite Development program for the Chicago Marathon after posting a 1:09:39 half marathon and earned several podium finishes at major half marathons. In 2014, he began pursuing longer distances, completing multiple ultra-marathons and trail races.

Looking to explore more forms of cardio in 2020, RJ discovered his passion for cycling. Soon after, RJ connected with CRYO-GEN, a welcoming cycling community of all abilities. Since then, RJ has competed in over 40 races with the men of CRYO RDT, including the team time trial, one of his favorite races.

Since 2009, RJ has been coaching runners of all ages. At the high school level, he coached the Brook Hill Track and Field distance runners to their first ever State Champion in the 1600m, and State Runner-Up in the 3200m in 2009 and the TK Gorman cross country team to the state championship meet later that year. From 2011-2015 RJ coached cross country and track & field at the University of Texas at Tyler, coaching several athletes to lifetime personal records and conference championship titles. From 2016-present he has provided professional consult for runners whose goals ranged from 5K to ultramarathon.

In 2018, he started working with triathletes and cyclists; a natural extension from a background in exercise physiology and time spent with his college coach, Bob Hepler – a 7-time Kona Ironman. In 2019, one of the first cyclists he coached went on to win the Texas State Team Time Trial Championship outdoors with her teammates. Additionally, RJ helped a 16-year-old improve from 4.2 to 4.9 w/kg in his FTP which also coincided with a drop to a 4:32 in the mile. Since then, RJ has worked with several cyclists on improving their overall fitness and enjoyment of the sport.

RJ began his career as a full-time Lecturer in the Department of Health and Kinesiology at the University of Texas at Tyler in 2010. He has taught Exercise Physiology, Principles of Training, Endurance Training, Sport Nutrition, Fitness Assessment Skills and Marathon Training, where he coached 25+ first-time runners to complete a marathon, which was featured on ESPN360. RJ’s passion is to help runners and cyclists reach their goals and meet their potential.